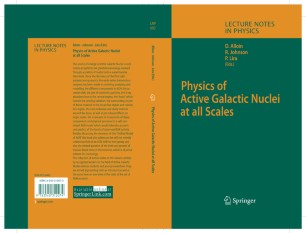 Physics of Active Galactic Nuclei at all Scales

The energy source in Active Galactic Nuclei is commonly accepted to be gravitational and released through accretion of matter onto a supermassive black hole. Since the discovery of the first radio galaxies and quasars in the early sixties, tremendous progress has been made in unveiling, analyzing and modelling the different components in AGN: the accretion disk, the jets of relativistic particles, the X-ray absorber close to the central engine, the "torus" which funnels the ionizing radiation, the surrounding clouds of dense material in the broad-line region and narrow-line region, the cool molecular and dusty material around the torus, as well as jet-induced effects on larger scales. Yet, it remains to incorporate all these components and physical processes within a self-consistent AGN model that would take into account, and predict, all the facets of observed AGN activity. Besides discussing the elements of this "Unified Model of AGN," this book also addresses the still not-entirely-understood link of an AGN with its host galaxy and also the related question of the birth and growth of massive black holes in the universe, which is of prime interest for cosmology.

The collection of lecture notes in this volume written by recognized experts in the field of Active Galactic Nuclei address students and young researchers. They are aimed at providing both an introduction and at the same time an overview of the state of the art of AGN research.