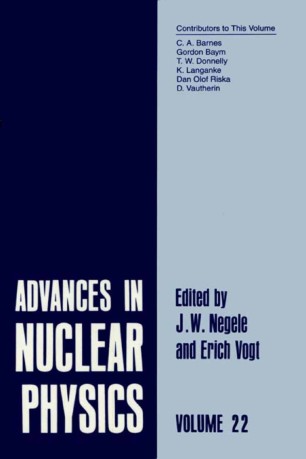 Part of the Advances in Nuclear Physics book series (volume 22)

This volume presents five pedagogical articles spanning frontier developments in contemporary nuclear physics ranging from the physics of a single nucleon to nucleosynthesis in the Big Bang. Although the objectives of Advances in Nuclear Physics have been and will continue to be quite distinct from those of conventional conference proceedings, the articles in this volume are carefully edited and expanded manuscripts based on an outstanding series of lectures delivered at the VI J. A. Swieca Summer School in Brazil. Starting at the smallest scale, the first article by Dan Olof Riska addresses realistic chiral symmetric models of the nucleon. Since the analytic tools are not yet developed to solve nonperturbative QCD directly, significant effort has been devoted in recent years to the development of models which incorporate and are constrained by the approximate chiral symmetry manifested in QCD. This article provides a clear introduction to chiral symmetry and the Skyrme model, and discusses the Skyrme model’s relation to the chiral bag model, its extensions, and its application to nucleons and hyperons.