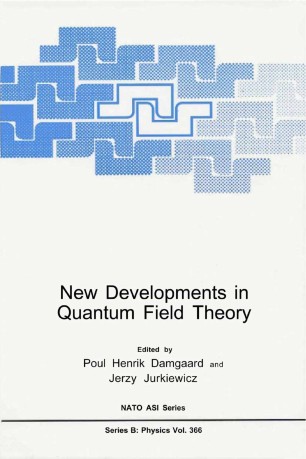 Quantum field theory is one of most central constructions in 20th century th- retical physics, and it continues to develop rapidly in many different directions. The aim of the workshop “New Developments in Quantum Field Theory”, which was held in Zakopane, Poland, June 14-20, 1997, was to capture a broad selection of the most recent advances in this field. The conference was sponsored by the Scientific and - vironmental Affairs Division of NATO, as part of the Advanced Research Workshop series. This book contains the proceedings of that meeting. Major topics covered at the workshop include quantized theories of gravity, string theory, conformal field theory, cosmology, field theory approaches to critical phenomena and the renormalization group, matrix models, and field theory techniques applied to the theory of turbulence. One common theme at the conference was the use of large-Nmatrix models to obtain exact results in a variety of different disciplines. For example, it has been known for several years that by taking a suitable double-scaling limit, certain string theories (or two-dimensional quantum gravity coupled to matter) can be re-obtained from the large-Nexpansion of matrix models. There continues to be a large activity in this area of research, which was well reflected by talks given at our workshop. Remarkably, large- Nmatrix models have very recently – just a few months before our meeting – been shown to have yet another deep relation to string theory.