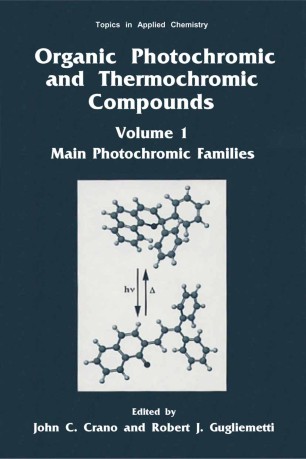 Part of the Topics in Applied Chemistry book series (TAPP)

Experiments showing a rapid and reversible change of color seem to be magic and are always fascinating. This process called photochromism, has a few real and many potential applications. Photochromic glasses that darken in the sunlight (protecting eyes from excessive light intensity) and bleach in dim light are today a part of everyday life. Organic Photochromic Compounds in plastic ophthalmic lenses, more comfortable to wear, are now competing with silver salts glasses, despite the longer lifetime of the inorganic system. This successful commercial application has given a new impetus to research in the general field of photochromism that had its most recent revival in the early eighties. The story of organic photochromism with its ups and downs, from the breakthroughs of the pioneering period in the fifties, through the hard times due to the drawbacks of photodegradation and the recent successes is in many ways a saga. The upsurges in the domain were marked by an increasing flow of articles in scientific journals and the publication of several Books (in 1971, 1990 and 1992) which have collected the important accumulated knowledge. Over this period, a considerable number of patents have been issued. International meetings have accompanied this activity, the most recent being held in 1993 (ISOP 93 at Les Embiez Island, France) and in 1996 (ISOP 96 in Clearwater, Florida, USA). Remarkably, these meetings had a good representation from both academia and industry. The next ISOP is planned for 1999 in Fukuoka, Japan.