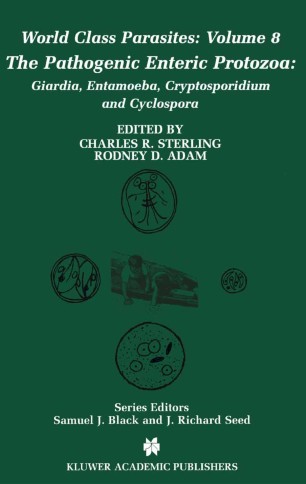 Giardia duodenalis (=G. lamblia), Entamoeba histolytica, Cryptosporidium parvum and Cyclospora cayetanensis are more than just a mouthful for most who might encounter them. These protozoan parasitic agents contribute significantly to the staggering caseload of diarrheal disease morbidity encountered in developing world nations. Compounding the issue of their mere presence is the fact that standard ova and parasite exams frequently do not detect these infections. Detectable stages may be shed intermittently or require specialized staining procedures. Added to this is the often large number of asymptomatic carriers who serve as reservoirs for infecting others. These parasites are also not strangers to more developed nations, having responsibility for both small and large-scale disease outbreaks. In such settings they may be even more difficult to detect simply because they are frequently overlooked in the grand scheme of disease causing possibilities. They share common features; all are Protozoa, all possess trophic stages that inhabit the gastrointestinal tract, all have the ability to produce disease and in some instances death, and all produce environmentally stable cysts or oocysts, which ensure their transmissibility. In other ways, these organisms are profoundly different. Giardia is a flagellate that inhabits the gut lumen in close association with enterocytes. Entamoeba is an amoeba that preferentially inhabits the mucosal region of the gut lumen, but which may, under certain circumstances, become invasive. Cryptosporidium and Cyclospora are obligate intracellular coccidians, each taking up a unique niche within their respective host enterocytes.