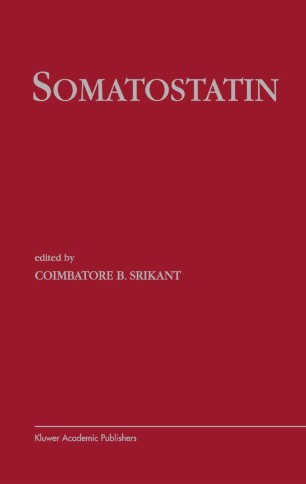 Thirty years have passed since somatostatin was discovered and its hormonal function defined [1,2]. The wide range of anatomical distribution and actions of somatostatin and its receptors stimulated intense scientific and clinical interest, and fostered extensive research into all aspects of its biology including regulation of its gene expression, processing of its precursor, biological and cellular actions relating to regulation cell secretion, motility and proliferation. The development of metabolically stable peptide analogs helped define its usefulness in the treatment of endocrine diseases and cancer. The heterogeneity of somatostatin receptors recognized in 1981 [3] was later shown to result from the existence and variable expression of five distinct subtypes that constitutes two distinct subfamilies with distinguishing pharmacological characteristics [4,5]. The molecular cloning of these receptor subtypes reignited the interest in this field leading to a major increase in our insight into the biology of somatostatin and its receptor subtypes, and has led to the design and development of subtype-selective peptide and non-peptide agonists and antagonists. Significant progress has been made in both basic and clinical research on somatostatin. Noteworthy developments include the role of somatostatin in neuronal patterning, delineation of subtype-selective cytostatic / cytotoxic antiproliferative actions, manipulation of cellular signaling by oligomeric association of somatostatin receptor subtypes amongst themselves or with other G protein-coupled receptors, application of radionuclide-tagged derivatives to localize somatostatin receptor positive tumors and their treatment through targeted delivery of radionuclide or chemotoxin tagged agonists through receptor-mediated endocytosis.