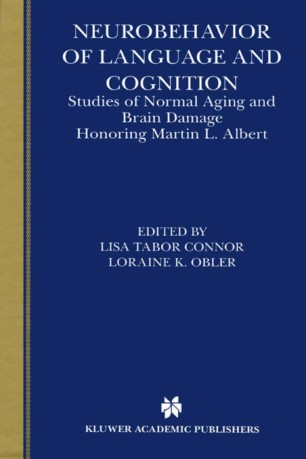 Neurobehavior of Language and Cognition

This volume has been composed as an appreciation of Martin L. Albert in the year of his 60th birthday. At least one contributor to each paper in this volume has been touched by Marty in some way; lie has mentored some, been a fellow student with some, and been a colleague to most. These contributors, as well as many others, view Marty as a gifted scientist and a wonderful human being. The breadth of his interests and intellectual pursuits is truly impressive; this breadth is reflected, only in part. by the diversity of the papers in this volume. His interests have ranged from psychopharmacology to cross-cultural understanding of dementia, through the aphasias, to the history of the fields that touch on behavioral neurology, especially neurology per se, cognitive psychology, speech-language pathology, and linguistics. Throughout his scholarly work, Martha Taylor Sarno notes, Marty never loses the human perspective, e. g. , the “powerfully disabling effect on the individual person” with aphasia or other neurological disorder. For those readers who only how a portion of his work, we thought that we should describe him here. Many of the people whom Marty has influenced have been able to contribute to this volume. We have invited some others who were unable to contribute to express their appreciation for him, as well.