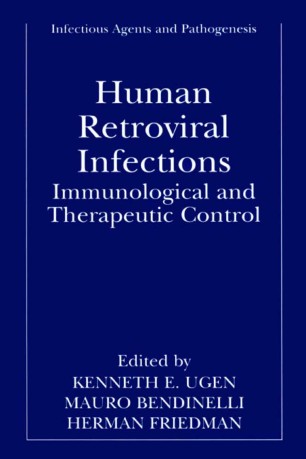 The discovery of the human T cell leukemia virus type I in the late 1970s heralded a new era in retrovirology. For the first time, it was demonstrated that a retrovirus could play a role in the development of a human disease, in this case adult T cell leukemia (ATL). Several years later, the acquired immunodeficiency syndrome (AIDS) epidemic began, and it was dem- strated that a retrovirus, originally designated the human T cell lymp- tropic virus type 3, was the causal agent of this syndrome. This virus, later named the human immunodeficiency virus type 1 (HIV-1), has since been extensively studied in terms of its pathogenesis as well as its ability to elicit immune responses. In that time, a tremendous amount of information has been obtained about the virus. Although recent drug regimens have been useful in significantly lowering viral loads and perhaps maintaining an asymptomatic state among individuals infected with HIV-1, an established “cure” for AIDS eludes us. In addition, the effective drug therapies are very expensive, and are not available to infected people in the third world, where greater than 90% of new infections occur. Furthermore, the development of viral resistance against the drug therapies is an additional concern. Despite extensive study, no effective vaccine has been developed. One of the problems in developing an effective vaccine against HIV-1 is the ability of the virus, particularly in the immunogenic envelop glycoprotein, to undergo amino acid hypervariability.