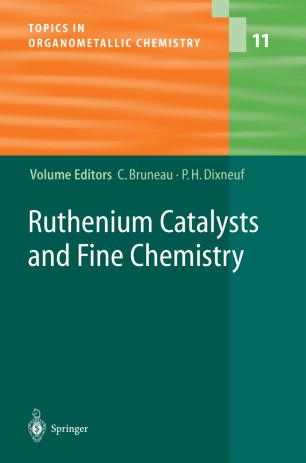 Molecular ruthenium catalysts, during the last decade, have provided new indispensable synthetic methods that cannot be promoted by other catalysts, and they now constitute an emerging field for the selective preparation of fine chemicals. The major reaction types for carbon-carbon and carbon-heteroatom bond formation, most of them with atom economy, are comprehensively discussed by leading experts. The authors highlight the most important discoveries in ruthenium catalysis and propose activation processes, some of them being still controversial. They illustrate the innovation and usefulness in organic synthesis of specific reactions including carbocyclization, cyclopropanation, olefin metathesis, carbonylation, oxidation, transformation of silicon containing substrates, and show novel reactions operating via vinylidene intermediates, radical processes, inert bonds activation as well as catalysis in water. Therefore, the reader will receive a balanced view of this rapidly developing field.