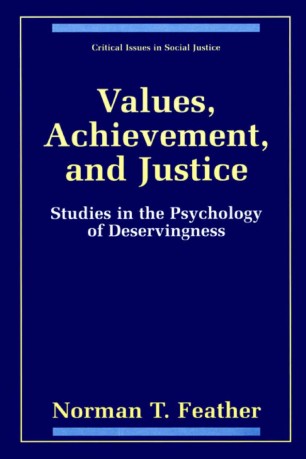 Studies in the Psychology of Deservingness

When we say that a person deserves a positive or negative outcome, we are making a judgment that is influenced by a number ofvariables. We would certainly take into account whether the person was resp- siblefortheoutcomeorwhethertheoutcomecouldbeattributedtoother sources. We would also consider whether the actions that led to the positive or negative outcome were actions that we would value or - tionsthatwouldmeetwithourdisapproval.Wemightalsobeinfluenced by the person’s own positive or negative characteristics, by ourkno- edgeofwhatkinds ofgroups orsocialcategoriesthepersonbelongedto, and by whether we like or dislike the person. Information about these differentvariableshastobe consideredandintegratedin someway, and our judgment of deservingness follows that psychological process, a process that involves the cognitive-affective system. Values, Achievements, and Justice is about deservingness and about the variables that affect the judgments we make. I use the term “dese- ingness” although I could equally have referred to “deservedness” or “desert.” The terms are all virtually equivalent in meaning, although dictionaries may separate them by using fine distinctions. I assume that the sorts of variables I have just described will affect ourjudgments of deservingness, and I further assume that a judgment of deservingness is most likely to occur when these variables fit together in a consistent, harmonious, and balanced way.

`...Feather deserves all the praise he will no doubt receive for his considerable achievements.'
APA REVIEW OF BOOKS, 46:3 (2001)
Buy options