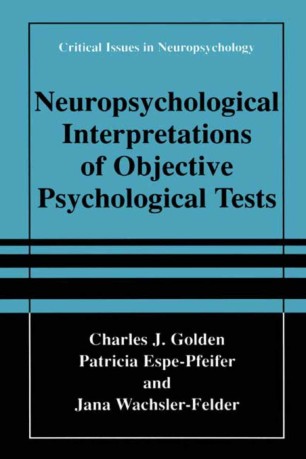 The inter-comparison of specific skills as represented by performance on neu- psychological tests is at the heart of the neuropsychological assessment process. However, there is a tendency to regard the interpretation of single tests as a process that is independent of performance on other tests, with integration of test information representing a summary of these individual test performances. As neuropsychology has become increasingly sophisticated, it has been recognized that many factors influence the performance on any given test. The meaning of the same score may vary considerably from one person to another, depending on his or her performance on other neuropsychological tests. Thus, a low score on the Halstead Category Test may indeed reflect frontal lobe damage, but only if we first rule out the influence of visual-spatial problems, emotionality, attentional issues, motivation, fatigue, and comprehension of the instructions. Simplistic interpre- tions that assume a common interpretation based on a specific score will inva- ably lead to errors in interpretation and conclusions. The purpose of this book is to provide each test that is described with a compendium of the possible interpretations that can be used with a variety of common tests that are often included in a neuropsychological test battery. The first chapter discusses some of the pitfalls and cautions when comparing the tests, while the second chapter examines administrative and scoring issues that may be unclear or unavailable for a given test.

`Overall, Golden et al's book serves a very useful purpose in providing an introduction to neuropsychological interpretive hypotheses to beginners in the field of neuropsychology. The book is a significant advancement over Golden's older book ....'
David E. Tupper in Brain Injury (2000)
Buy options