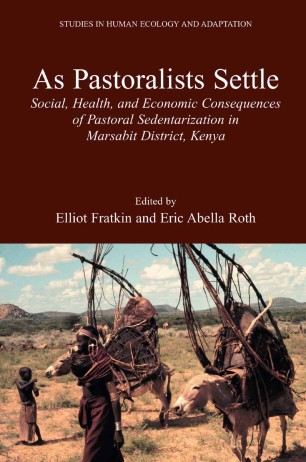 Part of the Studies in Human Ecology and Adaptation book series (STHE, volume 1)

The Social, Health, and Economic Consequences of Pastoral Sedentarization in Marsabit District, Northern Kenya ERICABELLA ROTH AND ELLIOT FRATKIN 1. INTRODUCTION Formerly nomadic livestock-keeping pastoralists have settled in many regions of the world in the past century. Some groups, including those in the former Soviet Union, Iran, and Israel, have settled in response to state-enforced measures; others including Saami in Norway or Bedouins in Saudi Arabia, in response to changing economic opportunities. East Africa, home to many cattle- and camel-keeping pastoral societies, has been among the most recent to change. The shift to sedentism by East African pastoralists increased d- matically in the late 20th century as a result of sharp economic, political, demographic, and environmental changes. Prolonged drought, population growth, increased reliance on ag- culture, and political insecurities including civil war and ethnic conflict have all affected the ability of pastoralists to keep their herds. Still, the majority of pastoralist households in Kenya, Ethiopia, Somalia, and Tanzania remain committed to raising livestock, even as they adapt to farming or urban residence. Pastoral production remains a major economic focus in the savannas and scrub deserts of Africa, due to both its ecological adaptability and the economic incentive to market livestock and their products (Fratkin, 2001). Pastoralists settle for a variety of reasons, some in response to ‘pushes’away from the pastoral economy, others to the ‘pulls’of urban or agricultural life.