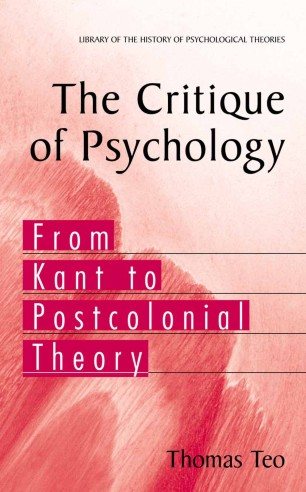 The Critique of Psychology

From Kant to Postcolonial Theory

Closely paralleling the history of psychology is the history of its critics, their theories, and their contributions. The Critique of Psychology is the first book to trace this alternate history, from a unique perspective that complements the many existing empirical, theoretical, and social histories of the field.

Thomas Teo cogently synthesizes major historical and theoretical narratives to describe two centuries of challenges to—and the reactions of—the mainstream. Some of these critiques of content, methodology, relevance, and philosophical worldview have actually influenced and become integrated into the canon; others pose moral questions still under debate. All are accessibly presented so that readers may judge their value for themselves:

- The natural-scientific critique of philosophical psychology in the 19th century

- The Marxist traditions of critique

- Feminist and postmodern critiques and the contemporary mainstream

- Postcolonial critiques and the shift from cross-cultural to multicultural psychology

This is not a book of critique for critique’s sake: Teo defines the field as a work in progress with goals that are evolving yet constant. In emphasizing ethical and political questions faced by psychology as a discipline, this visionary book points students, academics, and practitioners toward new possibilities for their shared future.