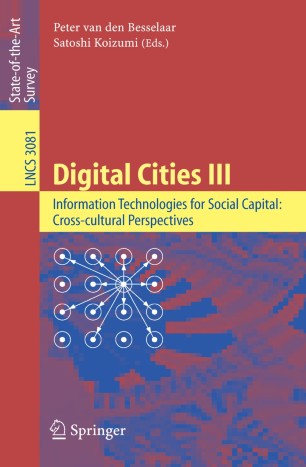 Digital cities constitutes a multidisciplinary field of research and development, where researchers, designers and developers of communityware interact and collaborate with social scientists studying the use and effects of these kinds of infrastructures and systems in their local application context. The field is rather young. After the diffusion of ICT in the world of organizations and companies, ICT entered everyday life. And this also influenced ICT research and development. The 1998 Workshop on Communityware and Social Interaction in Kyoto was an early meeting in which this emerging field was discussed. After that, two subsequent Digital Cities workshops were organized in Kyoto, and a third one in Amsterdam. This book is the result of the 3rd Workshop on Digital Cities, which took place September 18–19, 2003 in Amsterdam, in conjunction with the 1st Communities and Technologies Conference. Most of the papers were presented at this workshop, and were revised thoroughly afterwards. Also the case studies of digital cities in Asia, the US, and Europe, included in Part I, were direct offsprings of the Digital Cities Workshops. Together the papers in this volume give an interesting state-of-the-art overview of the field. In total 54 authors from the Americas, from Asia, and from Europe were contributed to this volume. The authors come from Brazil (two), the USA (eleven), China (three), Japan (fourteen), Finland (two), Germany (two), Italy (three), Portugal (two), the Netherlands (eight), and the UK (seven), indicating the international nature of the research field.