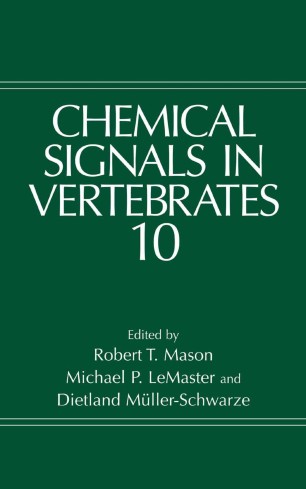 The editors and contributors to this volume should be justifiably proud of their participation in the tenth triennial meeting of the Chemical Signals in Vertebrates International Symposium. This meeting was held 27 years after the initial gathering of participants in Saratoga Springs, New York from June 6* to 9*, 1976. Subsequent meetings have been held every three years in Syracuse, New York; Sarasota, Florida; Laramie, Wyoming; Oxford, England; Philadelphia, Pennsylvania; Tubingen, Germany; Ithaca, New York; and Krakow, Poland. This tenth aimiversary symposium was held from July 29* through August 1*' in Corvallis, Oregon and was hosted by the Zoology Department and Biology Programs of Oregon State University. This book also represents the tenth in a series of books on chemical communication, chemical ecology, olfactory and vomeronasal research in vertebrate species. The species covered in the chapters herein range from fish to mammals including humans. By taxonomic breakdown the mammals are the most represented in number of species and chapter contributions. However, the hosts of the meeting endeavored to have some representative contributions covering all of the major vertebrate taxa. As in past years, the meeting was well-represented with just over 100 participants from 13 different nations. Plenary talks focused on some of the non-mammalian groups that have tended to be less represented in these symposia. Thus, we had a very nice overview of comparisons and contrasts of invertebrate chemical commimication to vertebrate systems.