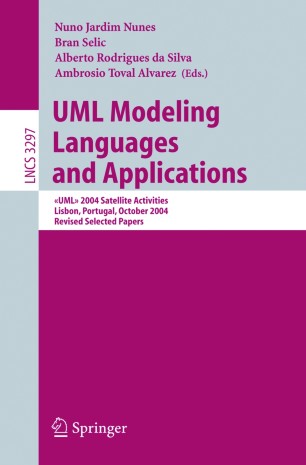 The UML 2004 conference was held in Lisbon (Portugal) from October 11 through October 15, 2004. It was the seventh conference in a series of annual events that started in 1998. UML has rapidly become one of the leading venues to present and discuss the development of object-oriented modeling. In order to re?ect the changes in the ?eld, the UML conference series will be continued from 2005 onwards under the name MODELS (Model Driven En- neering, Languages and Systems). Inane?orttomakethisyear’sconferencemoreusefulande?ectiveforawider community, including academics and practitioners working in areas related to UML and modeling in general, a set of satellite events was organized, including workshopsdedicatedtospeci?cresearchtopics,anindustrytrack,aposter/demo session, and a tools exhibit. This volume is a compilation of the contributions presented at these satellite events. Workshops at UML 2004 took place during the ?rst three days of the conference(fromOctober10to12). Followingthetraditionofprevious UML conferences, UML 2004workshopsprovidedacollaborativeforumforgroups of (typically 15 to 30) participants to exchange recent or preliminary results, to conduct intensive discussions on a particular topic, or to coordinate e?orts between representatives of a technical community. Ten workshops were held, covering a variety of hot topics, which have been covered in the workshop - ports contained in this volume. Each workshop lasted for a full day. A novelty with respect to previous UML conferences was the inclusion of a Doctoral Symposium, which was well received, to provide an explicit space for young - searchers developing their thesis on some aspect related to UML.