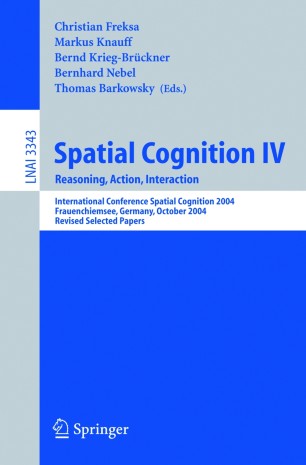 This is the fourth volume in a series of books dedicated to basic research in spatial cognition. Spatial cognition is a field that investigates the connection between the physical spatial world and the mental world. Philosophers and researchers have p- posed various views concerning the relation between the physical and the mental worlds: Plato considered pure concepts of thought as separate from their physical manifestations while Aristotle considered the physical and the mental realms as two aspects of the same substance. Descartes, a dualist, discussed the interaction between body and soul through an interface organ and thus introduced a functional view that presented a challenge for the natural sciences and the humanities. In modern psych- ogy, the relation between the physical and the cognitive space has been investigated using thorough experiments, and in artificial intelligence we have seen views as diverse as ‘problems can be solved on a representation of the world’ and ‘a representation of the world is not necessary. ’ Today’s spatial cognition work establishes a correspondence between the mental and the physical worlds by studying and exploiting their interaction; it investigates how mental space and spatial “reality” join together in understanding the world and in interacting with it. The physical and representational aspects are equally important in this work. Almost all topics of cognitive science manifest themselves in spatial cognition.