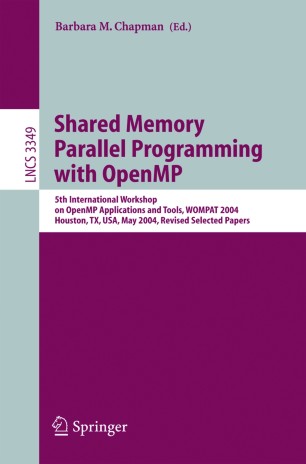 This book contains the Proceedings of the 5th Workshop on OpenMP Appli- tionsandTools(WOMPAT2004),whichtookplaceattheUniversityofHouston, Houston, Texas on May 17 and 18, 2004. Previous workshops in this series took place in Toronto, Canada, Fairbanks, Alaska, Purdue, Indiana, and San Diego, California.Thepurposeoftheworkshopwastobringtogetherusersanddevel- ers of the OpenMP API for shared memory parallel programming to disseminate their ideas and experiences and discuss the latest developments in OpenMP and its application. To support this aim, the program comprised a mixture of invited talks from research and industry, experience reports, and submitted papers, the last of which are presented in this volume. A tutorial introduction to OpenMP was held at the same location on May 18 by Ruud van der Pas from Sun Microsystems. Further, a two-day lab session called OMPlab was held immediately following the workshop and the tutorial on May 19 and 20, and was attended by both novice and advanced users. Many of the hardware vendors and several researchers gave in-depth tutorials on their softwareandmadetheirsystemsavailabletobothnoviceandadvancedattendees during OMPlab. Contributors to the WOMPAT 2004 OMPlab included IBM, Intel, Sun, the University of Tennessee, NASA, the University of Greenwich, Cornell University, the University of Oregon and the University of Houston. TheOpenMPAPIisawidelyacceptedstandardforhigh-levelsharedmemory parallel programming that was put forth by a consortium of vendors in 1997.