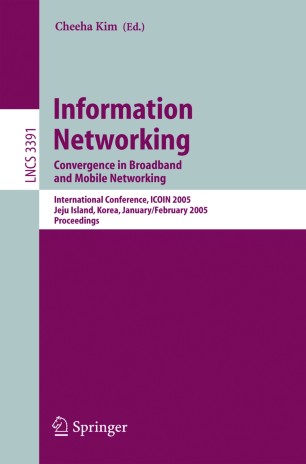 Welcome to ICOIN 2005,the International Conference on Information Netwo- ing, held at Ramada Plaza Jeju Hotel, Jeju Island, Korea during January 31– February2,2005.ICOIN2005followedthesuccessofpreviousconferences.Since 1986, the conference has provided a technical forum for various issues in inf- mation networking. The theme of each conference re?ects the historic events in the computer communication industry. (Please refer to www.icoin2005.or.kr for details.) The theme of ICOIN 2004, “Convergence in Broadband and Mobile Networking,” was used again for ICOIN 2005 since we believed it was ongoing. This year we received 427 submissions in total, which came from 22 co- tries. Upon submission, authors were asked to select one of the categories listed in the Call for Papers. The most popular category chosen was network se- rity, followed by mobile networks and wireless LANs. Other areas with strong showings included QoS and resource management, ad hoc and sensor networks, and wireless multimedia systems. From the outset, we could see where recent research interest lay and could make sure that the theme was still going in the right direction.