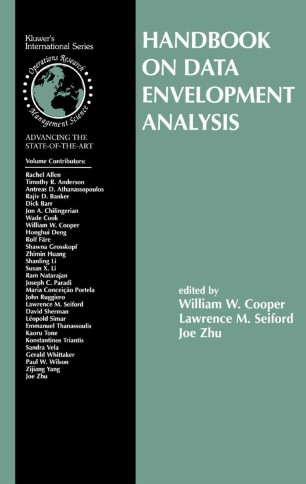 Data Envelopment Analysis (DEA) is a relatively new “data-oriented” approach for evaluating the performances of a set of entities called Decision- Making Units (DMUs) which convert multiple inputs into multiple outputs. DEA has been used in evaluating the performances of many different kinds of entities engaged in many different kinds of activities in many different contexts. It has opened up possibilities for use in cases which have been resistant to other approaches because of the complex and often unknown nature of the relations between the multiple inputs and outputs involved in many of these activities, which are often reported in non-commeasurable units. DEA has also been used to supply new insights into activities and entities that have previously been evaluated by othermethods. This handbook is intended to represent a milestone in the progression of DEA. Written by experts, who are often major contributors to the topics to be covered, it includes a comprehensive review and discussion of basic DEA models, extensions to the basic DEA methods, and a collection of DEA applications in the areas of banking, education, sports, retail, health care, and a review of current DEA software technology. This handbook’s chapters are organized into three categories: (i) basic DEA models, concepts, and their extensions; (ii) DEA applications; and (iii) xii Preface DEA software packages. The first category consists of eleven chapters.