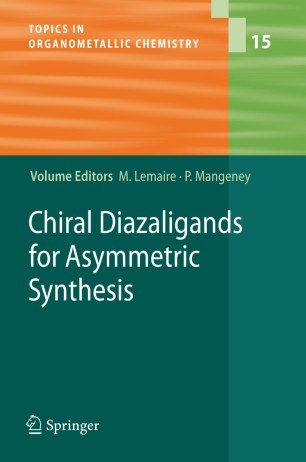 The use of phosphine derivatives has historically induced the tremendous development of catalysis (both non-asymmetric and asymmetric). Although the chemistry of amines is more documented, the use of nitrogen-containing ligands only appeared recently. Nevertheless, during the last ten years, the results describing chiral diamine preparations and their uses in asymmetric catalysis and synthesis are increasing faster than their phosphorus counterparts. The reader will find in this volume the most recent methods for the synthesis of chiral diamines as well as their applications in asymmetric catalysis of CC bond formation. Particular attention will be given to spartein and derivatives of such diamines. Recently, the particular properties and the chemistry of amines allowed to obtain catalysts easy to separate and recycle and new types of ligands such as diaminocarbenes, ureas and thioureas. Finally, the complexing properties of some diamines allowed the formation of complexes with chirality "at the metal " which is of major theoretical interest and presents numerous potential applications.