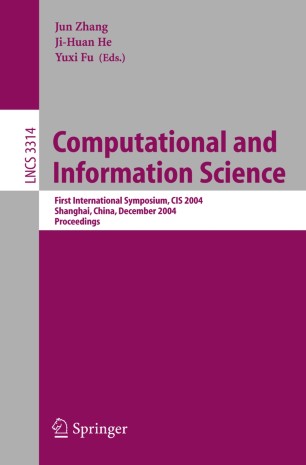 The 2004 International Symposium on Computational and Information Sciences (CIS 2004) aimed at bringing researchers in the area of computational and - formation sciences together to exchange new ideas and to explore new ground. The goal of the conference was to push the application of modern computing technologies to science, engineering, and information technologies to a new level of sophistication and understanding. Theinitialideatoorganizesuchaconferencewithafocusoncomputationand applicationswasoriginatedbyDr.JunZhang,duringhisvisittoChinainAugust 2003, in consultation with a few friends, including Dr. Jing Liu at the Chinese Academy of Sciences, Dr. Jun-Hai Yong at Tsinghua University, Dr. Geng Yang at Nanjing University of Posts and Communications, and a few others. After severaldiscussionswithDr.Ji-HuanHe,itwasdecidedthatDonghuaUniversity would host CIS 2004. CIS 2004 attempted to distinguish itself from other conferences in its - phasis on participation rather than publication. A submitted paper was only reviewed with the explicit understanding that, if accepted, at least one of the authors would attend and present the paper at the conference. It is our - lief that attending conferences is an important part of one’s academic career, through which academic networks can be built that may bene?t one’s academic life in the long run. We also made every e?ort to support graduate students in attending CIS 2004. In addition to set reduced registration fees for full-time graduate students, we awarded up to three prizes for to the Best Student Papers at CIS 2004. Students whose papers were selected for awards were given cash prizes, plus a waiver of registration fees.