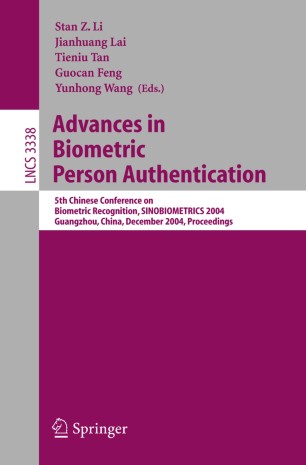 Following the previous four annual conferences, the 5th Chinese Conference on Biometrics Recognition (Sinobiometrics 2004) was held in Guangzhou, China in December 2004. The conference this year was aimed at promoting the international exchange of ideas and providing an opportunity for keeping abreast of the latest developments in biometric algorithms, systems, and applications. The 1st Biometrics Verification Competition (BVC) on face, iris, and fingerprint recognition was also conducted in conjunction with the conference. This book is composed of 74 papers presented at Sinobiometrics 2004, contributed by researchers and industrial practitioners from Korea, Japan, Singapore, Hong Kong, France, UK, US, as well as China. Of these, 60 papers were selected from 140 submissions and 14 were invited. The papers not only presented recent technical advances, but also addressed issues in biometric system design, standardization, and applications. Included among the invited were four feature papers on the ideas and algorithms of the best-performing biometric engines, which were either competition winners at the Face Authentication Test (FAT) 2004 or the Fingerprint Verification Competition (FVC) 2004, or they were the best-performing iris and palmprint recognition algorithms. The papers were complemented by five keynote lectures on biometrics, and face, fingerprint, and iris authentication and multimodal fusion by Arun Ross (West Virginia University) and Anil K. Jain (Michigan State University), Josef Kittler (University of Surrey), John Daugman (University of Cambridge), Raffaele Cappelli (University of Bologna), and Stan Z. Li (Chinese Academy of Sciences).