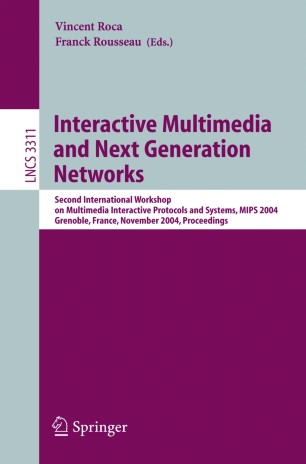 Interactive Multimedia and Next Generation Networks

Interactive Distributed Multimedia Systems (IDMS) and Protocols for Mul- media Systems (PROMS) have been two successful series of international events bringing together researchers, developers and practitioners from academia and industry in all areas of multimedia systems. These two workshops successfully merged in 2003 and now constitute the MIPS workshop. After the outstanding MIPS 2003 workshop, organized in Naples, Italy, by GiorgioVentreandRobertoCanonico,fromtheUniversityofNaplesFedericoII, MIPS2004movedtoGrenoble,France. Followingthegreattradition,MIPS2004 was intended to contribute to scienti?c, strategic and practical advances in the area of distributed multimedia applications, protocols and intelligent mana- ment tools, with emphasis on their provision over novel network architectures. This is undoubtedly a rather broad area, which is con?rmed by the large range of topics that were addressed in the submitted (and accepted) papers. This year the Call for Papers attracted 74 submissions, essentially from - rope and Asia, plus a few contributions from North America, the Middle East, and Africa, for a total of 20 countries. We would like to express our warmest gratitude to all the authors, without whom organizing this event would have been impossible! Thanks to the outstanding work of the Program Committee and the ad- tional reviewers, 20 full-sized papers and 5 additional short papers were ?nally accepted, which was not an easy task. Like MIPS 2003, MIPS 2004 remained a highly selective event (33% acceptance ratio, including the short papers) which is the best warrant of a good program quality.