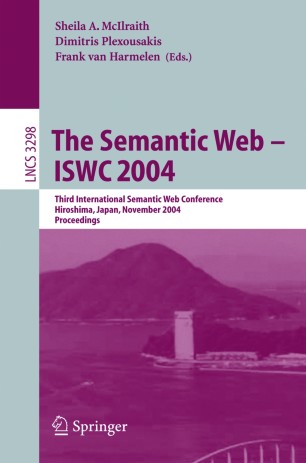 The 3rd International Semantic Web Conference (ISWC 2004) was held Nov- ber 7–11, 2004 in Hiroshima, Japan. If it is true what the proverb says: “Once by accident, twice by habit, three times by tradition,” then this third ISWC did indeed ?rmly establish a tradition. After the overwhelming interest in last year’s conference at Sanibel Island, Florida, this year’s conference showed that the Semantic Web is not just a one-day wonder, but has established itself ?rmly on the research agenda. At a time when special interest meetings with a Sem- tic Web theme are springing up at major conferences in numerous areas (ACL, VLDB, ECAI, AAAI, ECML, WWW, to name but a few), the ISWC series has established itself as the primary venue for Semantic Web research. Response to the call for papers for the conference continued to be strong. We solicited submissions to three tracks of the conference: the research track, the industrial track, and the poster track. The research track, the premier venue for basic research on the Semantic Web, received 205 submissions, of which 48 were accepted for publication. Each submission was evaluated by three p- gram committee members whose reviews were coordinated by members of the senior program committee. Final decisions were made by the program co-chairs in consultation with the conference chair and the senior program committee. The industrial track, soliciting papers describing industrial research on the - mantic Web, received 22 submissions, of which 7 were accepted for publication.