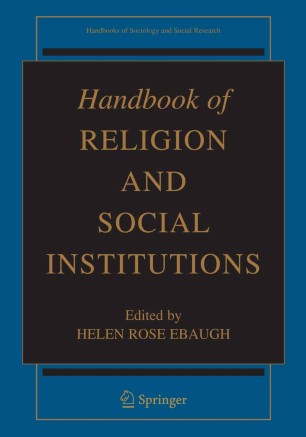 Handbook of Religion and Social Institutions

Over the past twenty years, religion as a predictor of social behaviors has been increasingly documented in social arenas. Traditional relationships between religion and family, voting patterns, race and education have been well noted. More recently, studies show the closer relationship with health behaviors, gender scripts, patterns of crime and deviance, military rituals, sports, legal decisions, life course behaviors and religious patterns among the new immigrants.

The Handbook of Religion and Social Institutions presents a comprehensive, up to date overview of the intersection of religion with major social institutions. Rather than being narrowly pitched to sociologists of religion, the major audience for the book is social scientists who are interested in identifying and understanding what is known about ways in which religion relates to the specific institution which they are teaching and/or in which they are conducting research. Each chapter will review studies that explore ways in which religion intersects with one specific institution. Some of the institutions covered are:

Family and the Life Cycle

Religion as a Social Institution

The Handbook of Religion and Social Institutions will be of interest to a broad array of scholars working across the social science disciplines.