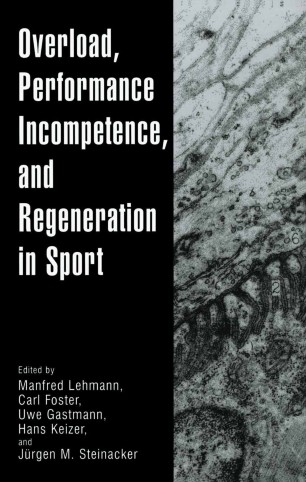 This volume summarizes the proceedings of the Reisensburg workshop which took place at Reisensburg Castle in November 1997". The castle is built on the site of an - cient Roman compound and situated in the south of Germany at the Danube river. Sci- tists from Australia, Austria, Belgium, Estonia, Germany, Italy, Netherlands, South Africa, Switzerland, and the United States participated in the workshop. Like the 1996 workshop, the proceedings of which will be published in Medicine and Science in Sports and Ex- cise in 1998, the 1997 workshop also focused on the topic of overtraining in its widest sense to deepen our knowledge in this particularly sensitive field of sports science and sports practice. The authors see the present volume in a context with the proceedings p- sented by Guten (ed. ) "Running Injuries"; Saunders, Philadelphia (1997) and Kxeider, Fry, and O'Toole (eds. ) "Overtraining in Sport"; Human Kinetics, Champaign IL (1997). Overtraining, that is, too much stress combined with too little time for regeneration, can be seen as a crucial and threatening problem within the modern athletic community, of which significance can already be recognized reading daily newspapers: ". . . During the 1996 European championships, a gymnast shook his head almost imperceptibly, closed his eyes briefly and left the arena without looking up. He was fatigue personified. 'Suddenly, I just couldn't do any more. I just wanted to rest'". A look at his schedule showed why.