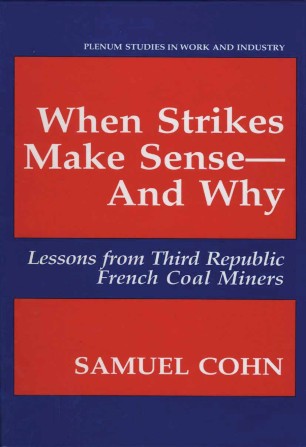 Social scientists have not helped the working class make strategic deci­ sions. Unionists need to know how to carry on industrial conflict so as to provide concrete economic benefits for their members. Should unions strike or not strike? Should losses be avoided at all costs, or can unions afford to take chances? Does economism gut the class power of workers or provide a pragmatic strategy for increasing workers' wage gains? We can say with great confidence that workers should join unions; there is now an exhaustive and compelling literature demonstrating that union membership provides a wide variety of economic benefits. We can say that corporatist class compromises lower income but increase job security and overall employment. Beyond that, however, we cannot say much. In particular, we can do little to advise particular unions in partic­ ular fixed institutional and political environments how they should han­ dle the microtactics of individual confrontations. The United Farm Work­ ers do not need a speech about the miracle of the Swedish industrial relations system. They need to know whether they should strike or not strike, and how their tactics should change if rival Teamsters come into the field. Unfortunately, medical research often has to start with rabbits be­ fore it proceeds to humans, and so it is with research in industrial conflict. The realistic prospects of doing a large sample analysis of con­ temporary American wage settlements that simultaneously estimates the effects of union tactics and economic factors are poor.

`Cohn construct[s] the most extensive and sophisticated analysis of strikes' outcomes that anyone has ever done... With exemplary clarity, Cohn lays out his ideas, sources, methods, findings, substantive conclusions, and strategic inferences. Informed readers are likely to wonder how conclusions drawn from the experience of French miners between 1890 to 1935 apply to other times and places... Cohn's powerful analyses give us new reasons for wanting to know.'
from the foreword by Charles Tilly, New School for Social Research, New York
Buy options