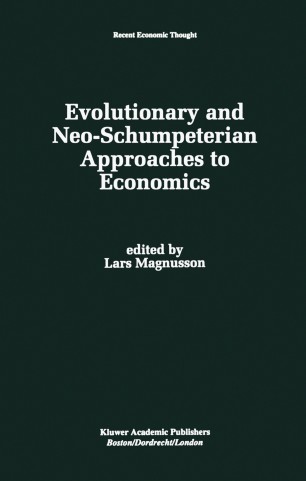 Evolutionary and Neo-Schumpeterian Approaches to Economics

not gentle to the capitalists" (Schumpeter, 1991). Thus, by instead portraying the conflict between entreprenuerial activity and the sociology of the modern state, he came quite close to the analysis carried out by Thorstein Veblen some decades earlier, who emphasized the conflict between p- gressive technology and the institutions of a contemporary "predatory dynastic State of early modern times, superficially altered by a suffusion of democratic and parliamentary institutions" (Veblen, 1964, p. 398). Modern neo-Schumpeterian approaches have continued to build on this groundwork provided by their master. During recent years there has been a great upsurge of discussion on technology, innovations, technological regimes, etc. from the dynamic perspective provided by Schumpeter (Dosi, 1984, Rosegger, 1985; Dosi et al., 1988). Thus the search process for (t- poral) extra profits has been stressed and has been used for modelling attempts. The wider institutional framework for technological change and innovation activity has also been strongly developed more recently. Hence emphasis has grown in the study of technological and industrial regimes, path dependency, and the network approach, developed recently, that social relationships structure the opportunities and constraints that face firms and agents that, for example, carry out innovations (Snehota, 1990).