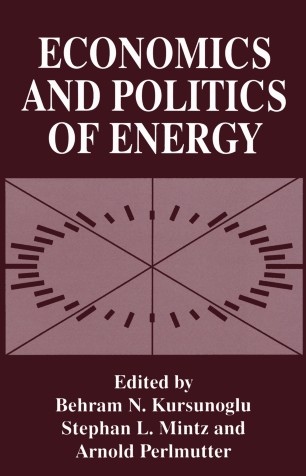 Economics and Politics of Energy

The 1995 conference was organized around two closely related themes and focused on the two pivotal aspects of energy, that is, economics and politics, both of which are decisive in providing long-term national and international strategies for the next century. Originally the program was going to include the participants from the new oil powers in Central Asia and Caucasus, newly independent from the former U.S.S.R. However, probably both economics and politics prevented their participation. Global energy projections, technological changes such as nuclear power and the fuel geopolitics of the coming century will be the basis for political and strategic planning. Based on the scenarios of likely global economic and population growth and of new energy technologies, what are foreseeable scenarios for the geopolitics of energy a half century ahead? What fresh worldwide systems should we start now? The political problems with profound economic impact could include, for example, the significance of the continuing worldwide growth of nuclear power, with such issues as the use of Highly Enriched Uranium (HEU) and Plutonium obtained from the dismantling of U.S. and former U.S.S.R. nuclear weapons; the urgency of nonproliferation; the disposal of civilian and military nuclear waste; and, nuclear power alternatives. In spite of U.S. reluctance, the increasing role of nuclear power is becoming apparent in several countries, and its potential has become an important political factor today.