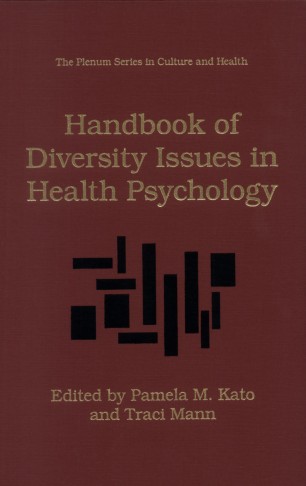 The field of health psychology has grown dramatically in the last decade, with exciting new developments in the study of how psychological and psychosocial processes contribute to risk for and disease sequelae for a variety of medical problems. In addition, the quality and effectiveness of many of our treatments, and health promotion and disease prevention efforts, have been significantly enhanced by the contributions of health psychologists (Taylor, 1995). Unfortunately, however, much of the theo­ rizing in health psychology and the empirical research that derives from it continue to reflect the mainstream bias of psychology and medicine, both of which have a primary focus on white, heterosexual, middle-class American men. This bias pervades our thinking despite the demographic heterogeneity of American society (U. S. Bureau of the Census, 1992) and the substantial body of epidemiologic evidence that indicates significant group differences in health status, burden of morbidity and mortality, life expectancy, quality of life, and the risk and protective factors that con­ tribute to these differences in health outcomes (National Center for Health Statistics, 1994; Myers, Kagawa-Singer, Kumanyika, Lex, & M- kides, 1995). There is also substantial evidence that many of the health promotion and disease prevention efforts that have proven effective with more affluent, educated whites, on whom they were developed, may not yield comparable results when used with populations that differ by eth­ nicity, social class, gender, or sexual orientation (Cochran & Mays, 1991; Castro, Coe, Gutierres, & Saenz, this volume; Chesney & Nealey, this volume).