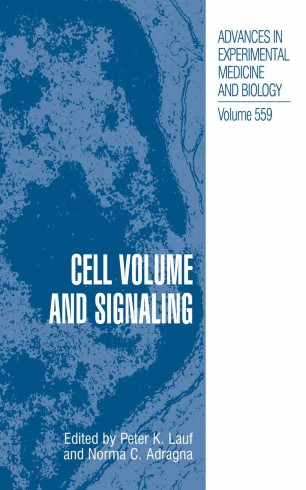 In front of you is the finished product of your work, the text of your contributions to the 2003 Dayton International Symposium on Cell Volume and Signal Transduction. As we all recall, this symposium brought together the Doyens of Cellular and Molecular Physiology as well as aspiring young investigators and students in this field. It became a memorable event in an illustrious series of International Symposia on Cell Volume and Signaling. This series, started by Professors Vladimir Strbák, Florian Lang and Monte Greer in Smolenice, Slovakia in 1997 and continued by Professors Rolf Kinne, Florian Lang and Frank Wehner in Berlin in 2000, is projected for 2005 in Copenhagen to be hosted by our colleague, Professor Else Hoffmann and her team. We dearly miss Monte Greer to whom this symposium was dedicated and addressed so eloquently by Vladimir Strbák in his Dedication to Monte. Monte and I became friends in Smolenice and had begun to discuss the 2003 meeting only a few days before his tragic accident in 2002. There are others who were not with us, and we missed them, too. We would not have been able to succeed in this event without the unflagging support of our higher administration at Wright State University, the NIDDKD of the National Institute of Health, and the Fuji Medical System (see Acknowledgments).