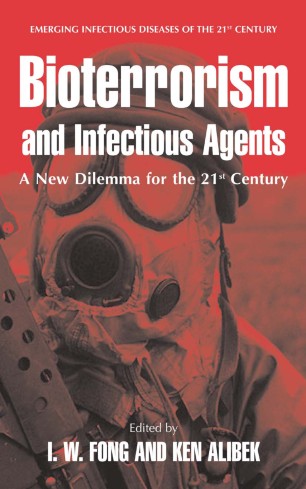 Bioterrorism and Infectious Agents: A New Dilemma for the 21st Century

Since the terrorist attack on the United States on September 11, 2001 and subsequent cases of anthrax in Florida and New York City, attention has been focused on the threat of b- logical warfare and bioterrorism. Biological warfare agents are de?ned as “living org- isms, whatever their nature, or infected material derived from them, which are used for h- tile purposes and intended to cause disease or death in man, animals and plants, and depend for their efforts on the ability to multiply in person, animal or plant attacked.” Biological warfare agents may be well suited for bioterrorism to create havoc and terror in a civilian population, because they are cheap and easy to obtain and dispense. Infectious or contagious diseases have played a major part in the history of warfare – deliberately or inadvertently – in restricting or assisting invading armies over the centuries. In 1346, the Tartars catapulted plaque-infected bodies into Kaffa in the Crimea to end a 3-year siege. Blankets contaminated with smallpox to infect North American Indians were used by British forces in the 18th century. More recently, the Japanese released ?eas infected with plaque in Chinese cities in the 1930s and 1940s. Biological research programs for both offensive and defensive strategies have been developed by the United States, Britain, the former Soviet Union, and Canada; several other nations are thought to have such programs.