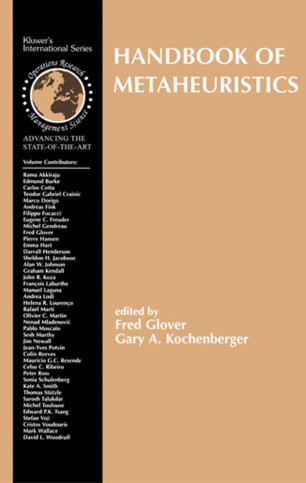 Metaheuristics, in their original definition, are solution methods that orchestrate an interaction between local improvement procedures and higher level strategies to create a process capable of escaping from local optima and performing a robust search of a solution space. Over time, these methods have also come to include any procedures that employ strategies for overcoming the trap of local optimality in complex solution spaces, especially those procedures that utilize one or more neighborhood structures as a means of defining admissible moves to transition from one solution to another, or to build or destroy solutions in constructive and destructive processes. The degree to which neighborhoods are exploited varies according to the type of procedure. In the case of certain population-based procedures, such as genetic al- rithms, neighborhoods are implicitly (and somewhat restrictively) defined by reference to replacing components of one solution with those of another, by variously chosen rules of exchange popularly given the name of “crossover. ” In other population-based methods, based on the notion of path relinking, neighborhood structures are used in their full generality, including constructive and destructive neighborhoods as well as those for transitioning between (complete) solutions. Certain hybrids of classical evoluti- ary approaches, which link them with local search, also use neighborhood structures more fully, though apart from the combination process itself.