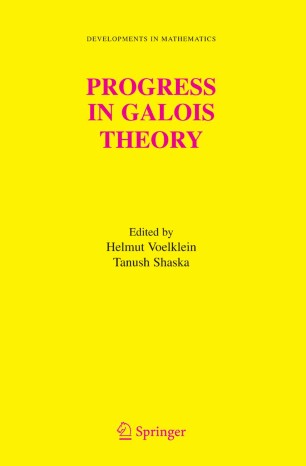 Part of the Developments in Mathematics book series (DEVM, volume 12)

A recent trend in the field of Galois theory is to tie the previous theory of curve coverings (mostly of the Riemann sphere) and Hurwitz spaces (moduli spaces for such covers) with the theory of algebraic curves and their moduli spaces. A general survey of this is given in the article by Voelklein. Further exemplifications come in the articles of Guralnick on automorphisms of modular curves in positive characteristic, of Zarhin on the Galois module structure of the 2-division points of hyperelliptic curves and of Krishnamoorthy, Shashka and Voelklein on invariants of genus 2 curves.

The more abstract aspects come into play when considering the totality of Galois extensions of a given field.  This leads to the study of absolute Galois groups and (profinite) fundamental groups. Haran and Jarden present a result on the problem of finding a group-theoretic characterization of absolute Galois groups. In a similar spirit, Boston studies infinite p-extensions of number fields unramified at p and makes a conjecture about a group-theoretic characterization of their Galois groups. He notes connections with the Fontaine-Mazur conjecture, knot theory and quantum field theory.  Nakamura continues his work on relationships between the absolute Galois group of the rationals and the Grothendieck-Teichmüller group. Finally, Fried takes us on a tour of places where classical tropics like modular curves and j-line covers connect to the genus zero problems which was the starting point of the Guralnick-Thompson Conjecture.

This volume is suitable for graduate students and researchers in the field.