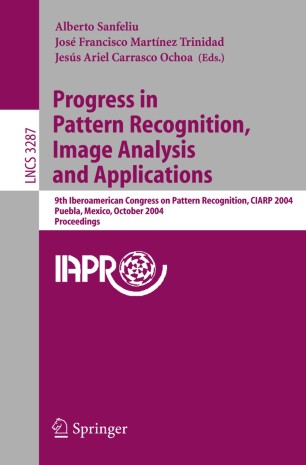 First of all, we want to congratulate two new research communities from M- ico and Brazil that have recently joined the Iberoamerican community and the International Association for Pattern Recognition. We believe that the series of congresses that started as the “Taller Iberoamericano de Reconocimiento de Patrones (TIARP)”, and later became the “Iberoamerican Congress on Pattern Recognition (CIARP)”, has contributed to these groupconsolidatione?orts. We hope that in the near future all the Iberoamerican countries will have their own groups and associations to promote our areas of interest; and that these congresses will serve as the forum for scienti?c research exchange, sharing of - pertise and new knowledge, and establishing contacts that improve cooperation between research groups in pattern recognition and related areas. CIARP 2004 (9th Iberoamerican Congress on Pattern Recognition) was the ninthinaseriesofpioneeringcongressesonpatternrecognitionintheIberoam- ican community. As in the previous year, CIARP 2004 also included worldwide participation. It took place in Puebla, Mexico. The aim of the congress was to promote and disseminate ongoing research and mathematical methods for pattern recognition, image analysis, and applications in such diverse areas as computer vision, robotics, industry, health, entertainment, space exploration, telecommunications, data mining, document analysis,and natural languagep- cessing and recognition, to name a few.