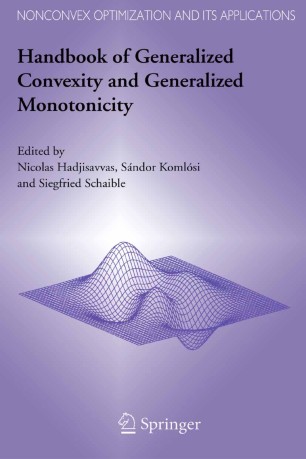 Part of the Nonconvex Optimization and Its Applications book series (NOIA, volume 76)

The Handbook offers a systematic and thorough exposition of the theory and applications of the various aspects of generalized convexity and generalized monotonicity. It is aimed at the non-expert, for whom it provides a detailed introduction, as well as at the expert who seeks to learn about the latest developments and references in his research area. Results in this fast growing field are contained in a large number of scientific papers which appeared in a variety of professional journals, partially due to the interdisciplinary nature of the subject matter. Each of its fourteen chapters is written by leading experts of the respective research area starting from the very basics and moving on to the state of the art of the subject.

Each chapter is complemented by a comprehensive bibliography which will assist the non-expert and expert alike.