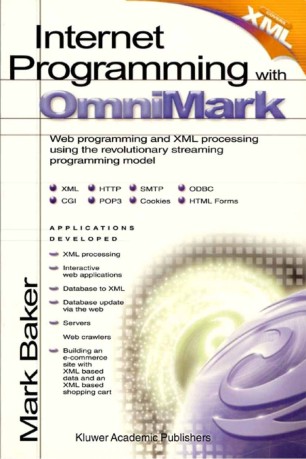 "I have been using OmniMark for a decade to solve many different kinds of information management problems. When OmniMark Technologies Corporation added features to their excellent language that allowed server functionality and database access, OmniMark became an even better, more powerful platform for data processing. When they made it free, it made me wonder why anyone is still using Perl.
I have used OmniMark as a very stable middle-tier programming language that is lightning fast, scaleable, and really fun to use. The language has a certain elegance that, once you learn how to `think OmniMark', you never want to even consider the alternatives. The native hierarchical architecture of the language, plus its luxuriously rich pattern matching syntax and support for structured information using XML and SGML parsing, make OmniMark a real joy.
"This book covers the core language, plus practical examples for common Internet programming applications. OmniMark is such a powerful program that I can't think of any Internet programming problem that can't be solved with OmniMark. This book makes that clear in real, understandable terms."
-Brian Travis, is the author of OmniMark At Work Volume 1: Getting Started and XML and SOAP Programming for Biz-Talk® Servers
"OmniMark has been the secret weapon of markup language programmers since the earliest days of SGML. Its new XML support should bring it to a far wider audience."
-Charles F. Goldfarb, is the inventor of SGML and author of The XML Handbook.