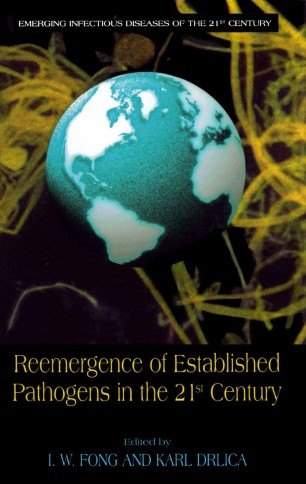 Reemergence of Established Pathogens in the 21st Century

In the closing decade of the last century, we saw warnings that infectious diseases will require much more attention from patients and physicians in the 21 st century. Recently d- covered diseases such as AIDS pose a major threat to the population at large, and to that threat has been added the re-emergence of established pathogens, microbes that were re- ily treatable in the past. Since infectious diseases already play a major role in the burden of illness and mortality, health care providers and planners are worried. A large proportion of the problem is man-made, arising mainly from the unnecessary overuse of antimicrobials in hospital and community settings and from the agricultural misuse of the agents in animal feed. A consequence has been a dramatic increase in resi- ant strains of bacteria that were considered conquerable several decades ago. Community infections caused by multi-resistant pneumococci serve as an example. These organisms were readily treated with penicillin, but now the spread of penicillin-resistant Streptococcus pneumoniae from continent to continent is becoming a worldwide problem. This is a major concern because pneumococcal infections are common in the community, being the le- ing cause of pneumonia, sinusitis, and meningitis. Resistant bacteria in hospitals are also becoming more prevalent. We have become accustomed to hearing about methicill- resistant Staphylococcus aureus (MRSA) and vancomycin-resistant enterococci (VRE), but now we have to be concerned about multidrug-resistant coliform bacteria and pseudomonads.