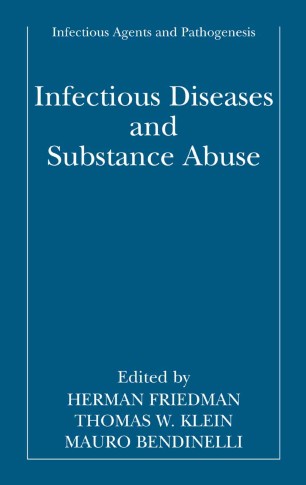 The use of recreational drugs of abuse by large numbers of individuals in this country and abroad has aroused serious concerns about the consequences of this activity. For example, it is recognized that marijuana is currently widely used as a recreational drug in the United States as well as other countries. Similarly, abuse of cocaine, especially crack cocaine, is considered to be an epidemic. “The war on drugs” by the US Government was directly aimed at the illicit use of cocaine, marijuana, and opiates as well as other drugs of abuse. Furthermore, alcohol is also considered a major problem of abuse in this country as well as in many other countries. It is estimated there are at least 10 million alcoholics in the United States alone. A signi?cant portion of those hospitalized with infectious diseases are alcoholics. Similarly, there have been many reports of association between marijuana use and increased susceptibility to infection as well as a re- tion between use of opiates and infections. The relationship between drug abuse and increased incidence of various infections has stimulated increased investi- tion of whether and how such drugs affect immune function, especially imp- tant for resistance against infectious agents. During the last decades, a wide variety of studies have shown that drugs of abuse, including marijuana, cocaine, or opiates, as well as alcohol, alter both neurophysiological as well as pathological responses of individuals.