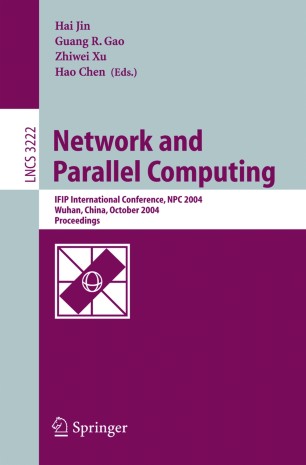 This proceedings contains the papers presented at the 2004 IFIP International Conference on Network and Parallel Computing (NPC 2004), held at Wuhan, China, from October 18 to 20, 2004. The goal of the conference was to establish an international forum for engineers and scientists to present their ideas and experiences in network and parallel computing. A total of 338 submissions were received in response to the call for papers. These papers werefrom Australia, Brazil,Canada,China, Finland, France, G- many, Hong Kong, India, Iran, Italy, Japan, Korea, Luxemburg, Malaysia, N- way, Spain, Sweden, Taiwan, UK, and USA. Each submission was sent to at least three reviewers.Each paper was judged according to its originality,inno- tion, readability, and relevance to the expected audience. Based on the reviews received, a total of 69 papers were accepted to be included in the proceedings. Among the 69 papers, 46 were accepted as full papers and were presented at the conference.Wealso accepted23papersasshortpapers;eachofthesepaperswas given an opportunity to have a brief presentation at the conference, followed by discussions in a poster session. Thus, due to the limited scope and time of the conference and the high number of submissions received, only 20% of the total submissions were included in the ?nal program.