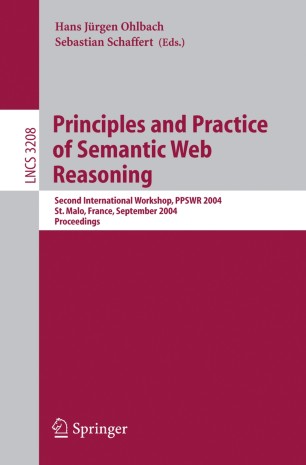 The best informal de?nition of the Semantic Web is maybe found in the May 2001Scienti?cAmericanarticle“TheSemanticWeb”(Berners-Leeetal. ),which says“TheSemanticWebisanextensionofthecurrentWebinwhichinformation is given well-de?ned meaning, better enabling computers and people to work in cooperation. ” People who work on the Semantic Web quite often base their work on the famous “semantic web tower”, a product of Tim Berners-Lee’s inspiring drawing on whiteboards. The lowest level is the level of character representation (Unicode) and the identi?cation of resources on the Web (URIs). The highest level concerns the problem of trusting information on the Web. Somewhere in the middle of the tower is the logic level. It addresses the problem of represe- ing information on the Web in a way so that inference rules can derive implicit information from explicitly stated information. The workshop “Principles and Practices of Semantic Web Reasoning” (PPSWR 2004) addressed problems on this level. It took place in September 2004 as a satellite event of the 20th Int- national Conference on Logic Programming (ICLP) in St. Malo, France. After PPSWR 2003 in Mumbai, India, it was the second workshop in this series. This book contains the articles presented at the workshop.