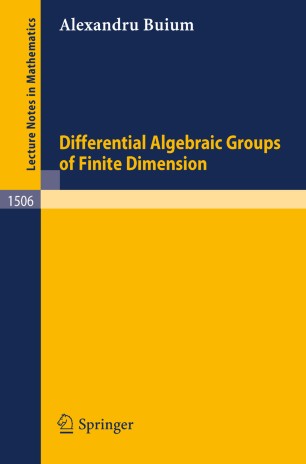 Differential algebraic groups were introduced by P. Cassidy and E. Kolchin and are, roughly speaking, groups defined by algebraic differential equations in the same way as algebraic groups are groups defined by algebraic equations. The aim of the book is two-fold: 1) the provide an algebraic geometer's introduction to differential algebraic groups and 2) to provide a structure and classification theory for the finite dimensional ones. The main idea of the approach is to relate this topic to the study of: a) deformations of (not necessarily linear) algebraic groups and b) deformations of their automorphisms. The reader is assumed to possesssome standard knowledge of algebraic geometry but no familiarity with Kolchin's work is necessary. The book is both a research monograph and an introduction to a new topic and thus will be of interest to a wide audience ranging from researchers to graduate students.