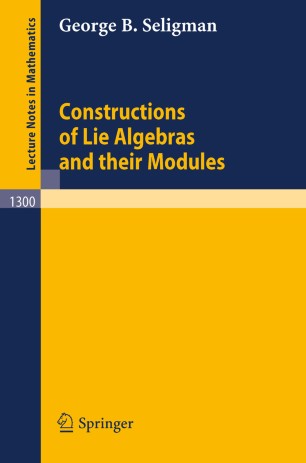 Constructions of Lie Algebras and their Modules

This book deals with central simple Lie algebras over arbitrary fields of characteristic zero. It aims to give constructions of the algebras and their finite-dimensional modules in terms that are rational with respect to the given ground field. All isotropic algebras with non-reduced relative root systems are treated, along with classical anisotropic algebras. The latter are treated by what seems to be a novel device, namely by studying certain modules for isotropic classical algebras in which they are embedded. In this development, symmetric powers of central simple associative algebras, along with generalized even Clifford algebras of involutorial algebras, play central roles. Considerable attention is given to exceptional algebras. The pace is that of a rather expansive research monograph. The reader who has at hand a standard introductory text on Lie algebras, such as Jacobson or Humphreys, should be in a position to understand the results. More technical matters arise in some of the detailed arguments. The book is intended for researchers and students of algebraic Lie theory, as well as for other researchers who are seeking explicit realizations of algebras or modules. It will probably be more useful as a resource to be dipped into, than as a text to be worked straight through.