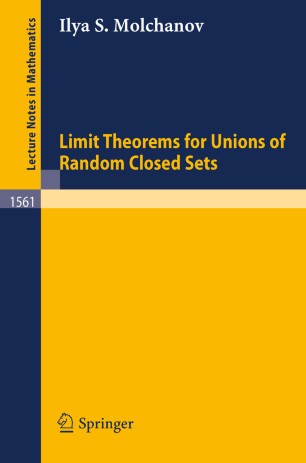 The book concerns limit theorems and laws of large numbers for scaled unionsof independent identically distributed random sets. These results generalizewell-known facts from the theory of extreme values. Limiting distributions (called union-stable) are characterized and found explicitly for many examples of random closed sets. The speed of convergence in the limit theorems for unions is estimated by means of the probability metrics method.It includes the evaluation of distances between distributions of random sets constructed similarly to the well-known distances between distributions of random variables. The techniques include regularly varying functions, topological properties of the space of closed sets, Choquet capacities, convex analysis and multivalued functions. Moreover, the concept of regular variation is elaborated for multivalued (set-valued) functions. Applications of the limit theorems to simulation of random sets, statistical tests, polygonal approximations of compacts, limit theorems for pointwise maxima of random functions are considered. Several open problems are mentioned. Addressed primarily to researchers in the theory of random sets, stochastic geometry and extreme value theory, the book will also be of interest to applied mathematicians working on applications of extremal processes and their spatial counterparts. The book is self-contained, and no familiarity with the theory of random sets is assumed.