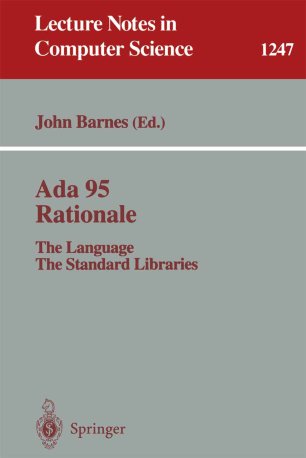 The Language The Standard Libraries

Ada 95, the enhanced version of the Ada programming language, is now in place and has attracted much attention in the community since the International Standard ISO/IEC 8652:1995(E) for the language was approved in 1995. The Ada 95 Rationale comes in four parts. The introductory part is a general discussion of the scope and objectives of Ada 95 and its major technical features. The second part contains a more detailed step by step account of the core language. The third part consists of several annexes addressing the predefined environment and specialized application areas. Finally, the three appendices of the fourth part are devoted to the upward compatibility with Ada 83, a few changes since the drafts of the standard were made public, and a summary of requirements.