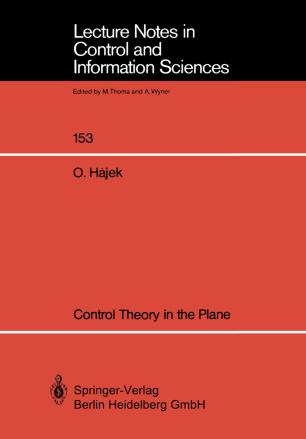 Control Theory in the Plane

This book introduces, presents, and illustrates, the theory of control for systems governed by ordinary differential equations, with special references to the two-dimensional case. These systems are continuous, finite-dimensional, deterministic, with a priori bounds on the admissible controls. Its form is that of a graduate-level textbook, involving motivation, a rather elementary level of exposition, illustrative examples, and extensive problem sections. It is addressed to applied mathematicians and engineers (system, control, electrical, mechanical, chemical) who wish to acquire further mathematical background in order to treat the subject they already know is both fascinating and important. Hopefully, it might also serve those whose interest is in modeling, bio-mathematics, and economics. The special feature of this book is the focused study, in the second part, of control systems whose state space is the phase plane. As with differential equations, where specialisation to the plane provides a far richer theory (the classical results of Poincaré and Bendixson), control theory of two-dimensional systems also has more intuitive and deeper results.