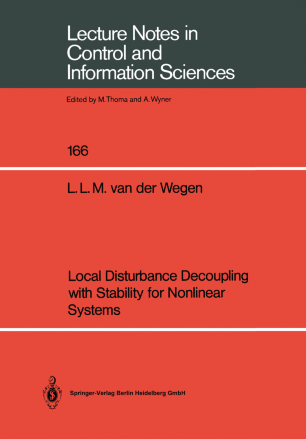 In this monograph the local disturbance decoupling problem with stability istreated for nonlinear systems. This problem consists in finding a (dynamic) state feedback for a given control system with two kinds of inputs, viz. controlled inputs and (uncontrolled) disturbances such that after application of this feedback the outputs are not influenced by the disturbances and the resulting internal dynamics are locally exponentially stable. In case only static state feedback is allowed two essentially different solutions are obtained, viz. a fundamental one and a more problem-oriented one. Both methods generalize well-known solutions for linear systems. In the last chapter a solution is found in case dynamic state feedback is allowed. Here a typical nonlinear phenomenon is pointed out, namely that there exist nonlinear systems for which the disturbance decoupling problem (with stability) can be solved by applying dynamic feedback, but not by using static feedback. The bookis intended for researchers in mathematical nonlinear systems theory. Geometric techniques play a key role in the book. Therefore, in Chapter 6 algebraic techniques are recalled and used.