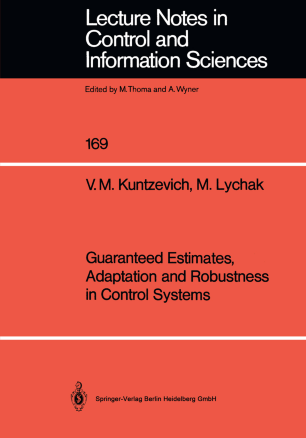 The book is concerned with the problems of dynamic systems control in conditions of uncertainty caused by the lack of adequate a priori data on control objects' properties. Its special feature is the use of a priori estimates of indeter- mined quantities on the form of sets. A unique method of ad- aptive control systems construction is described. A con- structional algorithm for solving parametric identification problems is suggested which allows guaranteed estimate to be received in the form of some set. The application of game approach tothe statement and solution of control synthesis problems under the conditions of uncertainty has allowed to reduce the problem to the minimax one. The appearance of further unimprovable estimates causes the necessity to refu- se the use of adaptive control and to turn to the robust control. Because of this, much attention is being given to the problem of the robust stability and synthesis of robust control. The book isintended for specialists concerend with the investigation and design of control systems who have knowledge in mathematics within the courses for high technical schools.