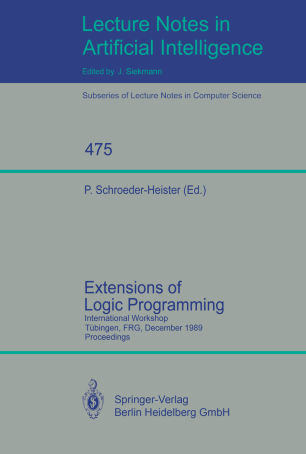 This volume contains finalized versions of papers presented at an international workshop on extensions of logic programming, held at the Seminar for Natural Language Systems at the University of Tübingen in December 1989. Several recent extensions of definite Horn clause programming, especially those with a proof-theoretic background, have much in common. One common thread is a new emphasis on hypothetical reasoning, which is typically inspired by Gentzen-style sequent or natural deduction systems. This is not only of theoretical significance, but also bears upon computational issues. It was one purpose of the workshop to bring some of these recent developments together. The volume covers topics such as the languages Lambda-Prolog, N-Prolog, and GCLA, the relationship between logic programming and functional programming, and the relationship between extensions of logic programming and automated theorem proving. It contains the results of the first conference concentrating on proof-theoretic approaches to logic programming.